I couldn’t find a guide like this online so I thought I’d compile my own based on my (so far unsuccessful) property search. Please note:

Thanks to the Dulwich Estate, there is an abundance of mid-century apartment blocks and terraced houses designed by Austin Vernon & Partners clustered in an attractive, almost wooded setting near Gipsy Hill station. Flats in the blocks, named after explorers (Drake, Raleigh, Grenville, Marlowe, Knoll, Lowood), are spacious and reasonably priced at around £425k. The houses are more expensive (around £650-750k, depending on size and design). If you’re not fussed about an architecturally significant property, there are a number of reasonably priced mid-century style housing developments and apartment blocks about (see Linley Court). 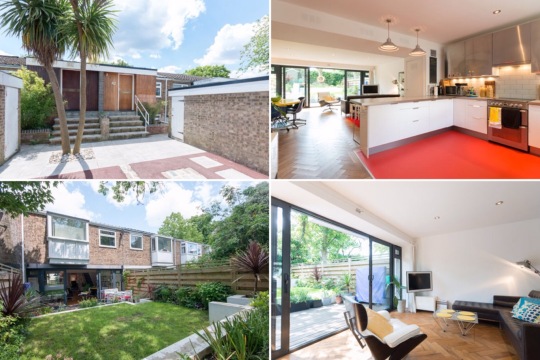 Exterior and communal areas of Lowood Court on the Dulwich Estate

A house in Lings Coppice, a 1960s housing development near West Dulwich station, is about £800k. Though small, the houses are very characterful with a rather special double height/void. Houses in the Peckarman’s Wood development nearby are possibly even more spectacular but very rarely come up for sale.

The elegant Park Court in nearby Penge is also worth a look. Two bedroom flats go for between £400-425k depending on condition (prices here have remained static for a couple of years).

Exteriors of mid-century houses in Dulwich

Interiors of mid-century houses in Dulwich

Highgate is resplendent with beautiful mid-century houses but these are only for people with several million to spend. A flat in one of the numerous mid-century apartment blocks are slightly more affordable – there are quite a few along Shepherds Hill. The nicest flats can be found in Highpoint, which start from around £700k but have a £15k in annual maintenance fee attached.

Communal area of Highpoint One, Highgate

Interior and exterior of mid-century house in Highgate

Exterior and interior of mid-century house in Highgate

Archway is home to Stoneleigh Terrace, a renowned designed modernist estate. I’m pretty sure that the construction of these flats means that it’s difficult to take out a mortgage to buy one but when they do come on the market, they’re around £400k for a one bedroom, £525k for a two bedroom split level maisonette and around £700k for the larger house-style properties. 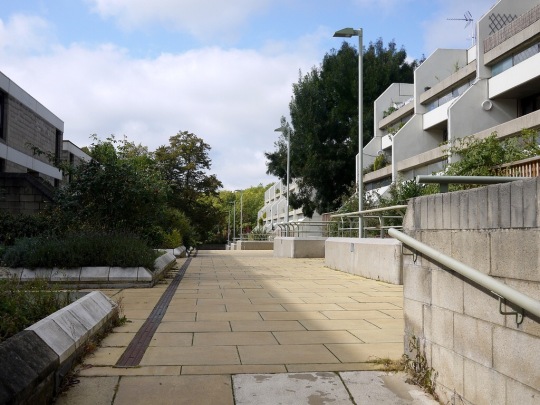 I think I’ve pretty much covered everything that Forest Hill has to offer from a mid-century housing perspective in previous blog entries! There are lots of mid century terraces including some nice Norman Starrett-designed ones (prices range from around 450k for a little two bedroom house to £750k for something more substantial) and a smattering of apartment blocks around the Hyndewood area (£350-375k).

Exterior and interior of Norman Starrett house in Forest Hill 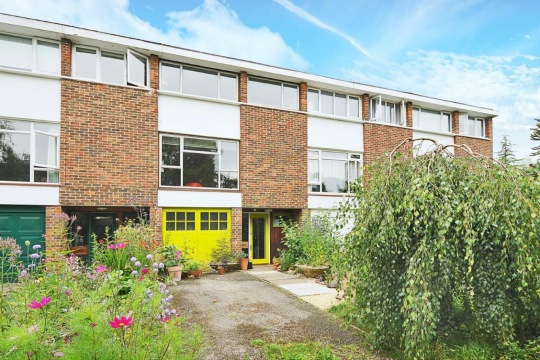 Exterior of another Norman Starrett terraced house in Forest Hill

There’s also one of those Austin Vernon & Partners-designed apartment blocks (at £500-525k, the flats in Frobisher Court are a lot more expensive than identical flats in Gipsy Hill and I’m not entirely sure why). 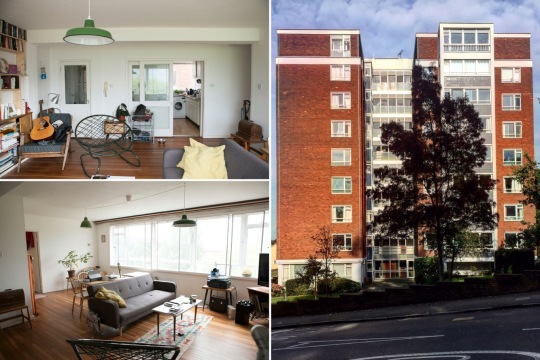 I don’t know much about Chislehurst, an affluent-looking residential area slightly to the south and east than the more popular Blackheath. It does, however, seem to contain a high concentration of attractive mid-century houses, including this incredible Norman Starrett estate (there’s a house currently on the market which looks like a deluxe version of the Norman Starrett houses that we’ve been to see in Forest Hill) and some handsome detached properties. There seems to be less in the way of mid century apartment blocks or estates. Prices for the houses seem to range from £850k to upwards of £1.5million.

I really like what I’ve seen of Ham and would consider moving there if the transport links improved (it’s serviced by buses only with the nearest rail links over a mile away). There’s the large Eric Lyons-designed Parkleys Span estate (around £400-425k for a two bedroom flat) and the even nicer Langham House Close just by the common (around £475k for a two bedroom flat). There are also some nice enough mid-century-style houses at around the £550-£650k mark, which seems like decent value. 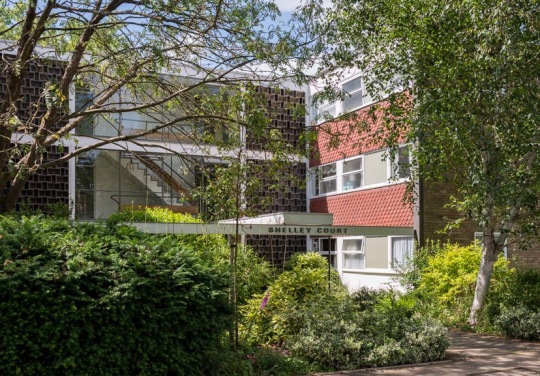 Shelley Court in the Parkleys Span estate in Ham, Richmond

Exterior and interior of Shelley Court in Ham, Richmond 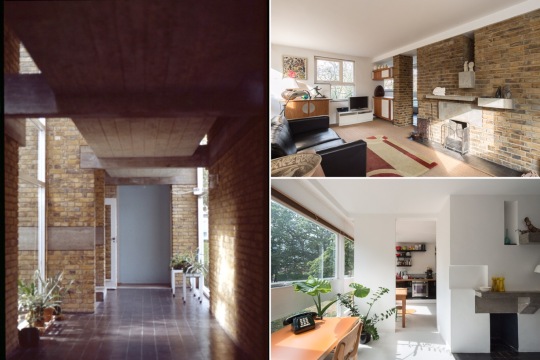 Communal area and interior of a flat in Langham House Close in Ham, Richmond

An episode of Location Location Location brought Weybridge to my attention as an area with a decent amount of mid-century housing in the form of apartment blocks (including the charmingly ugly Stroudwater Park) and some great houses.

Interior and exterior of flat in Stroudwater Park, Weybridge

Amongst the best houses are those at Templemere, a rather stunning Eric Lyons-designed housing development (much larger and bolder than the average Span estate). Prices seem quite reasonable for an area that I’ve always associated with being a very pricey commuter town (around £350-400k for a 2 bedroom flat and £600-750k for one of the more modest mid-century houses). 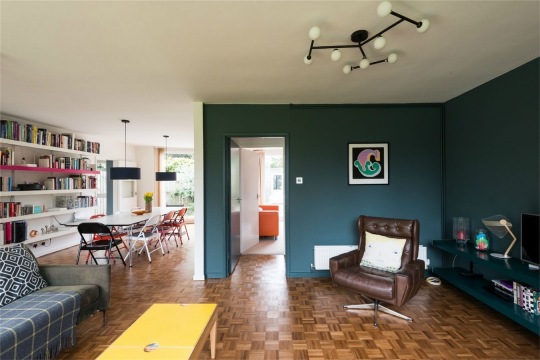 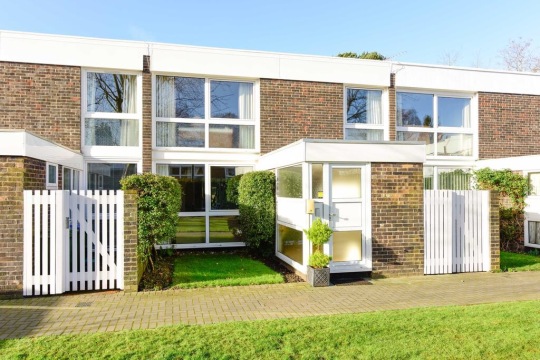 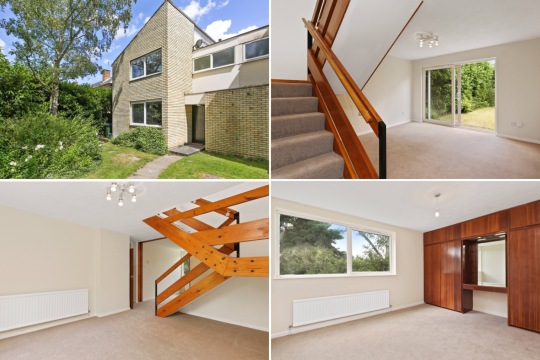 Exterior and interior of mid-century house in Weybridge

One of the biggest revelations for me during my property search has been this unassuming south east London district next to Croydon. One of the first properties I came across was Blair Court, a rather stunning modernist housing development. 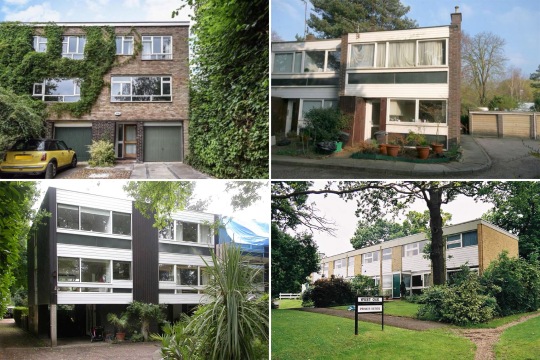 Examples of mid-century houses in Beckenham 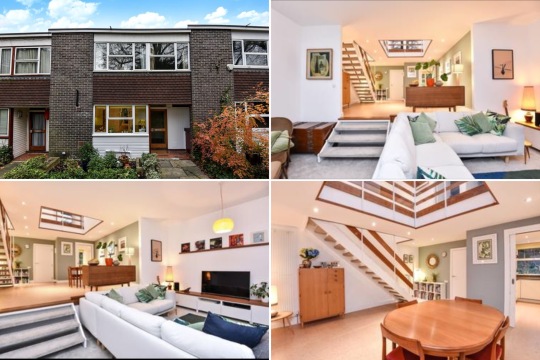 Exterior and Interior of mid-century house in Beckenham

This wasn’t the only property of this type in the area- there appears to be plenty of other developments, one-off houses and unusual apartment blocks, including the outlandishly designed Apex Close. Prices are around £500-750k for a house and around £350-400k for a two bedroom flat.

Blackheath is home to possibly the most centrally located and priciest Eric Lyons-designed Span estate. The estate really is massive and contains multiple apartment blocks and houses in different styles and sizes. The most desirable Span properties are the larger T15 type houses (around £900k) and the flats in the South Row block, on the southern side of the heath overlooking the water (£550k for a two bedroom flat). Aside from Span properties, I’ve come across a number of slightly more nondescript mid-century terraced houses (around £550-650k).

Examples of Span properties in Blackheath 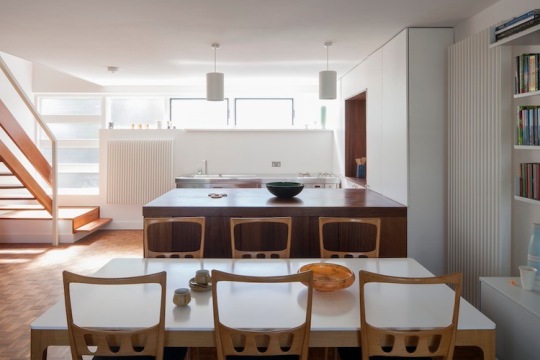 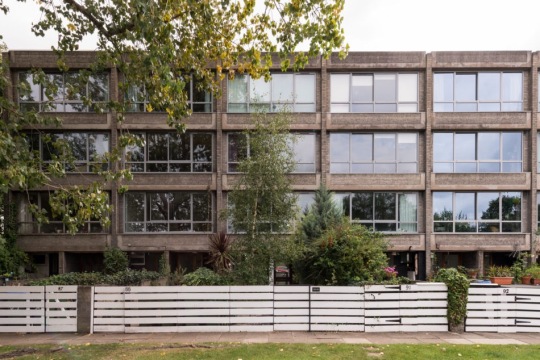