The Dulwich artists’ Open House weekend allowed me to enjoy two of my favourite pastimes at once: shopping and nosing around other people’s mid century homes. 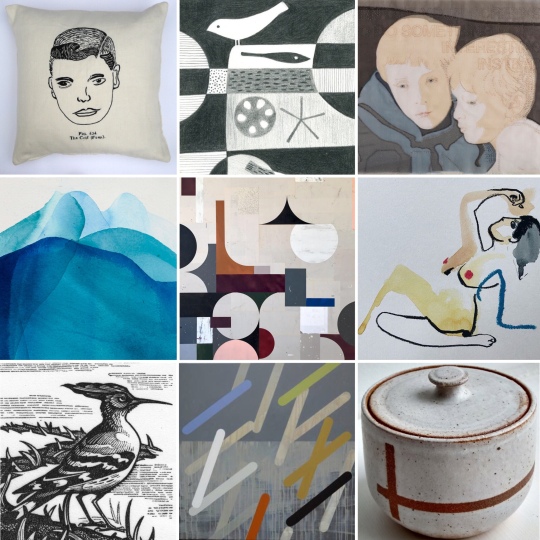 With the goal of finding a suitable artwork to hang on one of the bare walls in the hallway of our house, we set off around the map provided by the organisers. I’ll admit that I chose the places that we ended up visiting 40% based on the art (which I won’t even attempt to write about due to a lack of knowledge and appropriate vocabulary on my part – I’ll provide links to the artists’ websites instead) and 60% based on the house in which the art was being exhibited.

First on the agenda was Sarah Hamilton who was displaying her prints, painting and homewares in her Austin Vernon & Partners-designed house in Peckarmans Wood. 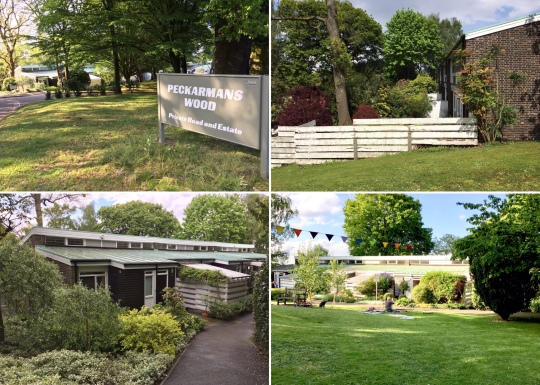 Built in 1963 and widely considered to be the finest of all the 1960s Dulwich houses, her house was one of the larger, two storey types with an upside-down layout (entry and living spaces on the ground floor, bedrooms on the lower lground floor with access to the garden), floor-to-ceiling windows, wooden panelling, pitched ceilings and elevated views over the communal grounds and towards the City. 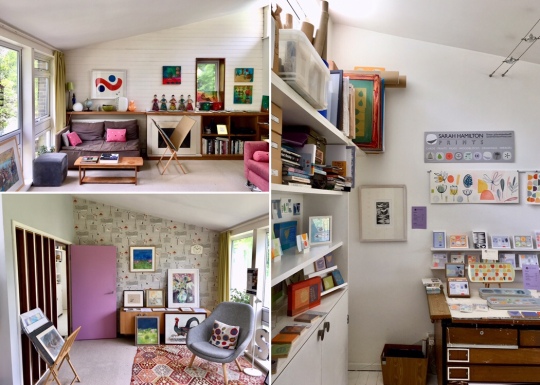 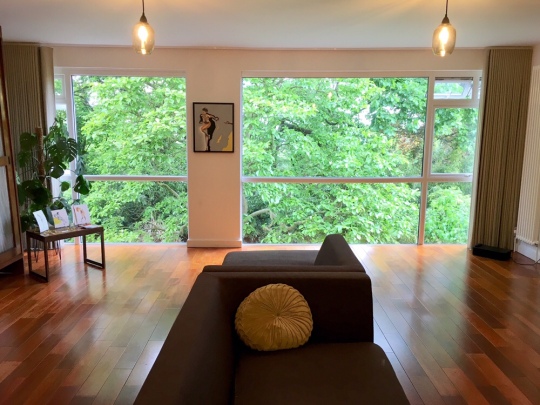 These houses were deceptively substantial, containing multiple, generously proportioned living areas (both artists had knocked through the original kitchen on the ground floor) and five bedrooms spread across four floors. 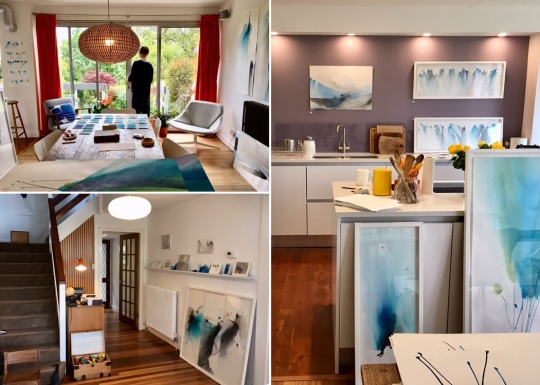 Both houses had panoramic views from the top of Sydenham Hill and access to an idyllic communal green at the bottom of the their beautifully manicured gardens. 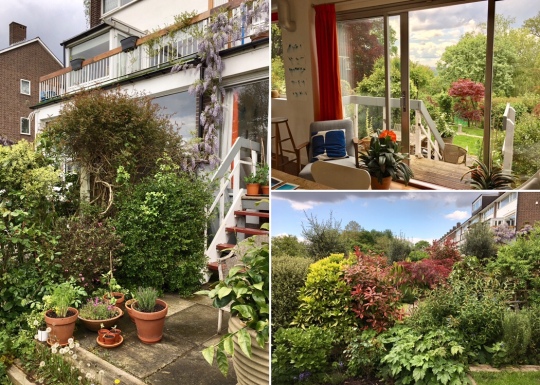 Next on the list were The Fine Groove and Birgitta Pohl exhibiting intricate wood engravings and functional, decorative stoneware at a split-level maisonette which had the feeling of a house in Breakspeare, a sixties-looking development next to Sydenham Hill station. 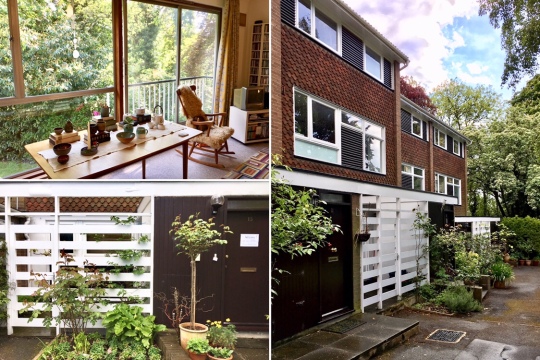 Joy Godden and Charlie Loxley were exhibiting jewellery and children’s prints in a house in Lings Coppice, which had been reconfigured on the ground floor to create an open plan space with bi-folding doors opening out onto the garden.

Jim Grundy was exhibiting his rather stunning geometric abstract paintings at his classic sixties three-storey townhouse on Half Moon Lane. 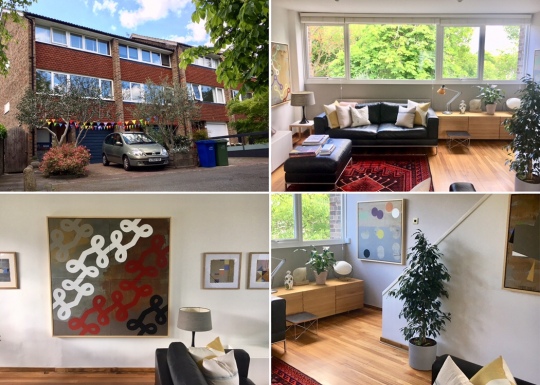 Slightly further afield near Denmark Hill was Charlene Mullen displaying her embroidered scenic cushions and ceramics of London at her house in The Hamlet, a rather lovely development of 32 terraced houses arranged in a rectangular formation around a large communal green. 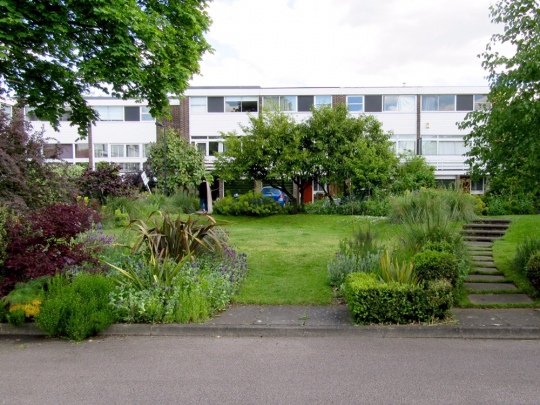 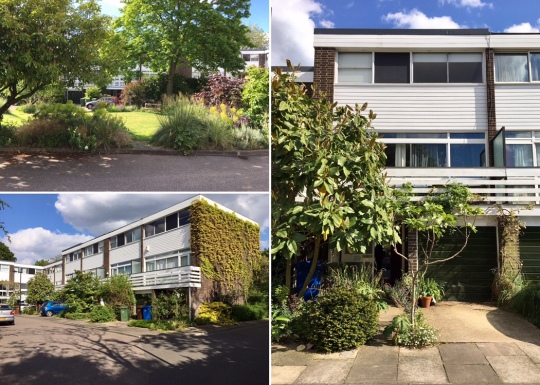 Built in 1967, it was reportedly architect Peter Moiret’s final project before he died so he was intent on designing something special. Split over three floors, the house was generously proportioned with an open-plan, very deluxe-looking kitchen on the ground floor with access to an exotic-looking garden and a split-level reception room on the first floor with a balcony at both ends. 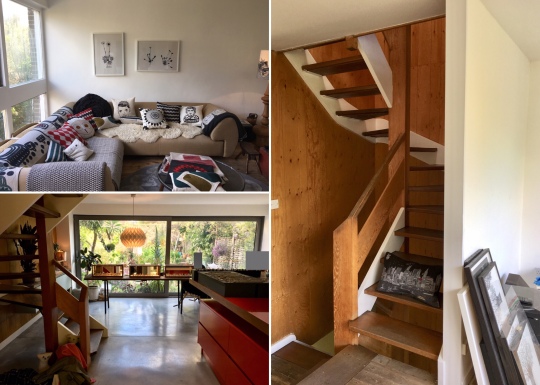 Last on the itinerary were Emily Jo Gibbs and Fabio Almeida in Forest Hill. Emily Jo Gibbs was displaying her beautifully delicate hand-stitched textile portraits and still lifes in the classic three-storey sixties townhouse opposite the Horniman Museum that she grew up in. 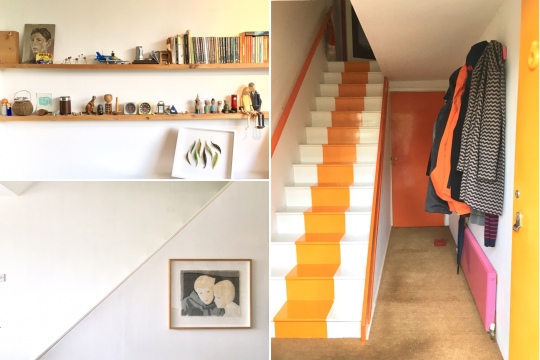 Fabio Almeida’s abstract paintings and collages persuaded us to trek up that hill to the Grassmount development. 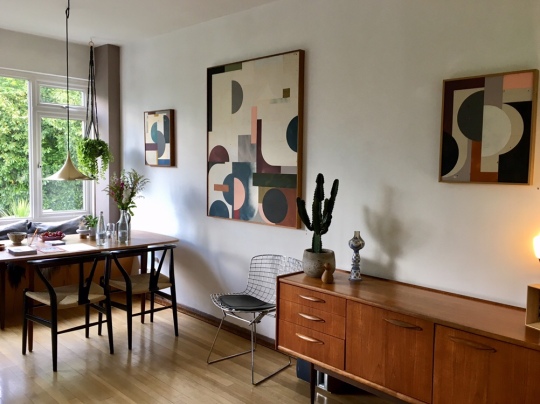 Like the townhouse in Grassmount that we viewed during our property search, Fabio Almeida’s house was generously proportioned and provided the perfect mid-century flavoured backdrop for his fantastic (and surprisingly accessibly priced) pieces. 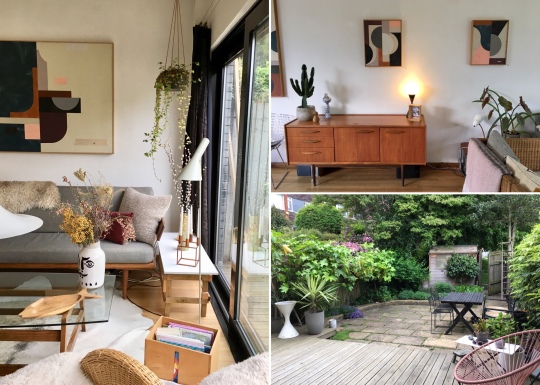 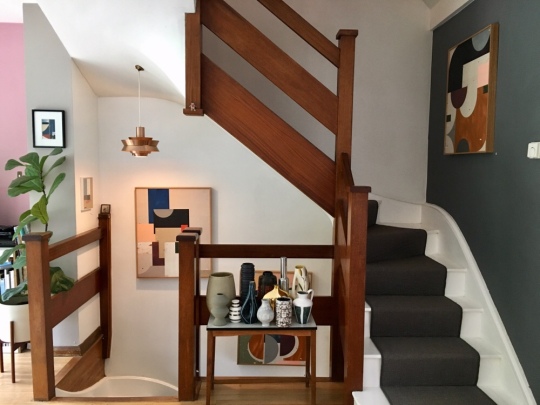