We recently decided to spend a long weekend in Rotterdam because: a) you can get there in about three hours from London on the Eurostar; and b) I really wanted to visit Sonnenveld Huis, which explains why the majority of this blog entry is dedicated to it.

Sonnenveld Huis, a stunning 1930s residential property, has been open to the public since 2001. Designed by architects Brinkman and Van der Vlugt for Albertus Sonneveld and his family, Sonnenvleld Huis was built between 1929 and 1933 and is reportedly one of the best-preserved private houses in the Dutch Functionalist style in the Netherlands. 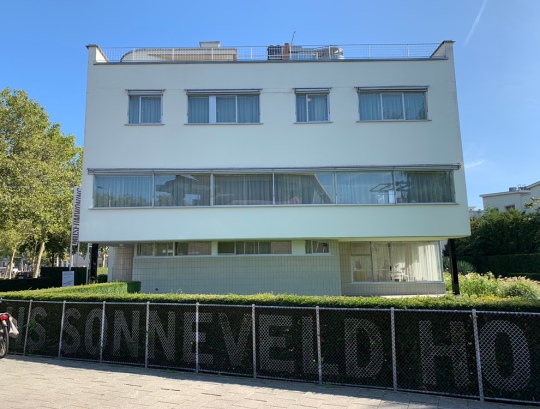 Functionalist architects prioritised light, air and space, designing efficient and hygienic buildings using modern techniques and materials such as steel and concrete. Floor plans were designed to make internal spaces open and light, enhanced by balconies and terraces. Sonneveld Huis, which felt staggeringly contemporary for a building from the 1930s, was clearly built with these principles in mind. This feeling of modernity was enhanced by Albertus Sonnenveld’s installation of state of the art mod cons throughout the house including telephones in the bedrooms, wall-mounted climate control units, a massage shower with multiple shower heads and a system of music speakers throughout the house which could be controlled from certain rooms (a 1930s version of Sonos, if you will).

The house was split over three floors. The ground floor contained the servants’ quarters, garage and a charming bright studio room for the Sonneveld daughters to receive guests.

Sonnenveld Huis, the daughters’ studio room – built-in seating with speaker embedded into the side 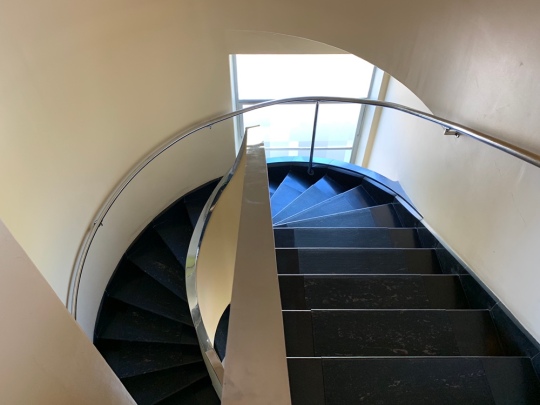 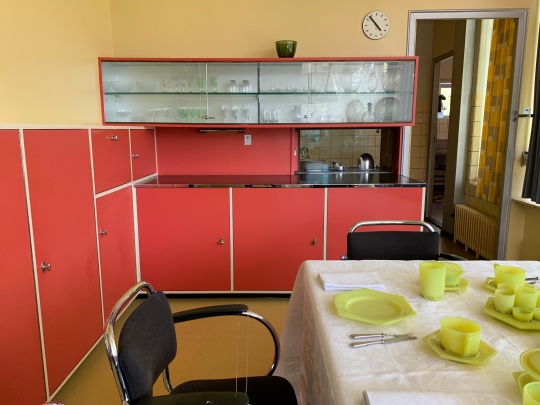 The dining room flowed though into a very spacious living room which could be divided into two using a sliding partition wall. One end of the room opened out onto a large terrace at one end and the other end housed a library and an additional seating area (the high-backed orange chairs were for the men and the lower-backed orange chairs were for the women and their voluminous hairstyles). 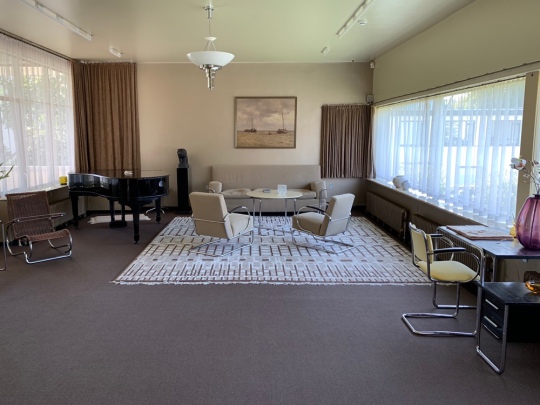 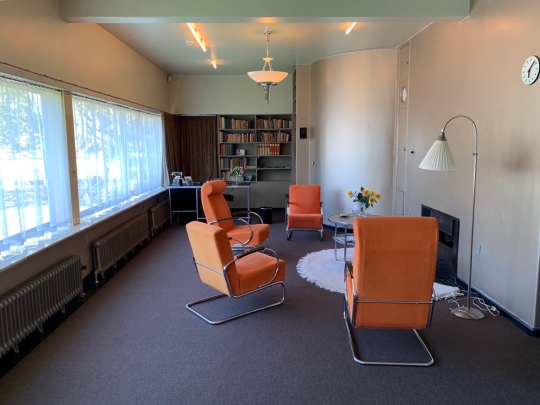 The second floor contained the bedrooms: a guest bedroom (in which the colour scheme reminded me a little too much of a sanatorium), a separate walk-in linen room with extensive built-in storage and the daughters’ bedrooms which had a shared jack-and-jill bathroom in between them. 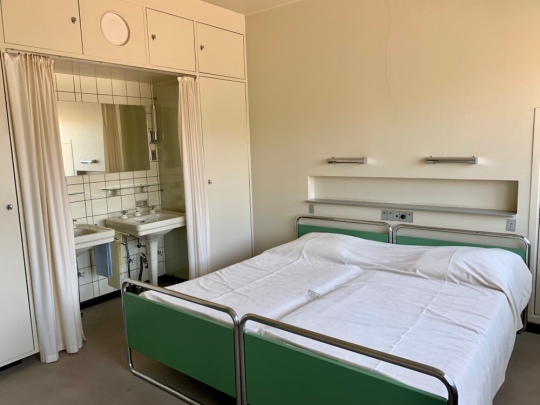 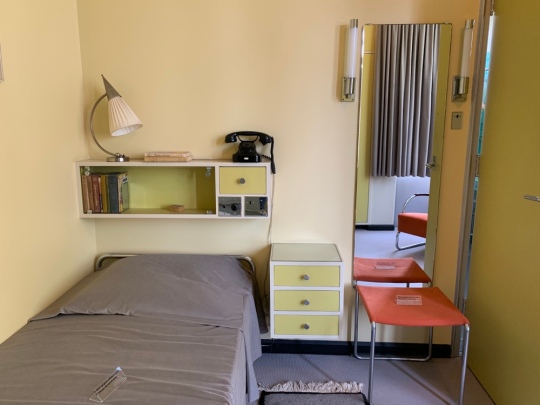 At the end of the hall was an impossibly glamorous master bedroom with a wraparound terrace, a large en-suite bathroom and a separate dressing room. The staircase on the second floor continued up to the roof, which was also used as a terrace.

This really was a very luxurious and expensive house. Clearly, no expense was spared at time on the design, furnishings and fittings (the carpets alone were ridiculously sumptuous). The unconventional use of colour was also stunning – I’ve never seen anything quite so glamorous as that bronze paint used on that curved wall in the library area and in the master bedroom.

Sonneveld Huis is absolutely worth making the trip to Rotterdam to see in person. The audio tour (informative but also quite irreverent) was excellent and the freedom to peruse almost every inch of the house at will was refreshing – you were even allowed to sit on most of the furniture!

Sonnenveld Huis, exterior from the street

Chabot Huis, a stunning modernist villa designed in 1938 by architects Gerrit Willem Bass and Leonoard Stokla, was a few doors down from Sonnenveld Huis. The villa was initially built as a private house for the Kraaijeveld family but has been used since 1993 as a museum dedicated to the painter and sculptor Hendrik Chabot.

Unfortunately, I didn’t get to see much of the interior of Chabot Huis because the galleries were closed for a re-hanging and when I tried to access the parts of the building that did appear to be open, I was unceremoniously thrown out after failing to produce a pre-booked ticket. I did, however, find some photos of the interior online. 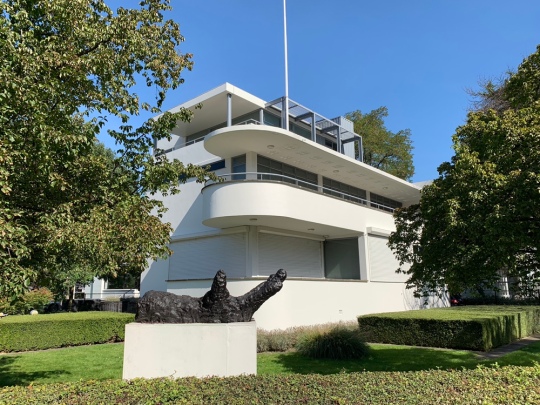 The much photographed yellow Cube houses were an intriguing oddity; more interesting than actually impressive. 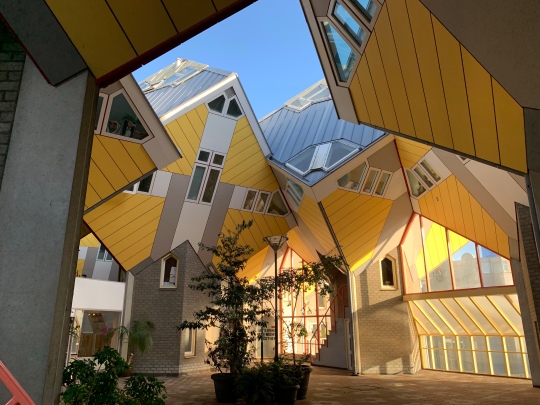 Built in 1984 by the architect Piet Blom and located on Overblaak Street above the Blaak metro station, the complex of homes, shops and a pedestrian bridge consisted of a hive of 51 cubes, all attached to one another. Blom’s innovative design involved tilting the cube of a conventional house 45 degrees, and fixing it on top of a hexagonal post. Each house had its entrance at the base of this post, which contained a staircase leading up into the cube itself. 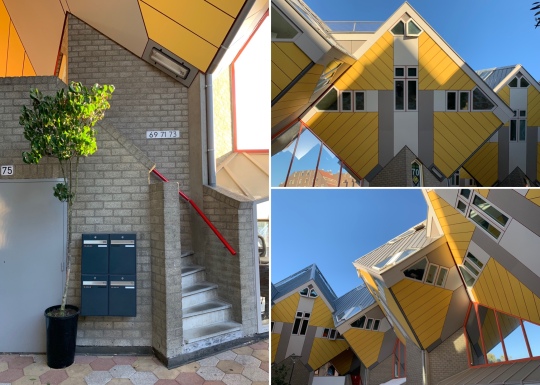 Cube houses, exterior – staircase up to one of the residential properties

An owner of one of the cube houses had opened his home to the public as a “show cube”, which allowed us to see inside an example of one of the houses with most of its original features intact.

Inside, the first floor of the house consisted of a living room and open kitchen, the second floor contained the sleeping area and a bathroom and the apex of the cube contained a further living area.

The house did not seem like a very practical space to live in. The apex room at the top of the cube was stiflingly hot and all of the walls and windows were angled at 55 degrees which meant that about a quarter of the 1000 sq ft floorspace was unusable, giving the house a slightly claustrophobic feel. I must say that the colour scheme and sharp-angled built in furniture (futuristic through an early 80s lens) probably did not help. 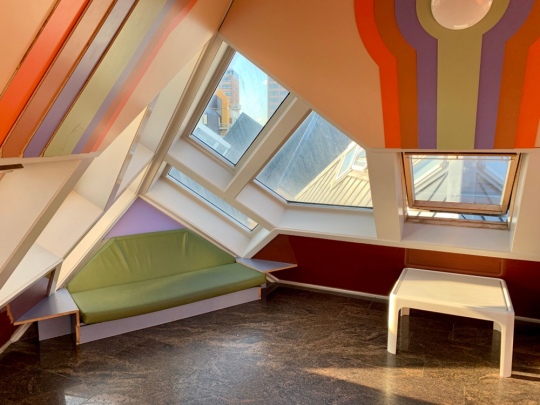 I didn’t have much luck on the shopping front in Rotterdam despite the abundance of appealing independent stores.

Pannekoekstraat was a lovely street of boutiques and cafes just a short walk away from the super commercial Blaak area.

Hutspot, which I suppose would be described in pretentious retailspeak as a “lifestyle concept store” offered a combination of tasteful clothes, design objects and local art from a mix of established brands and young designers and artists. The stuff wasn’t cheap but it wasn’t ridiculously expensive either and the store reminded me of a more grown up, more premium version of Urban Outfitters. 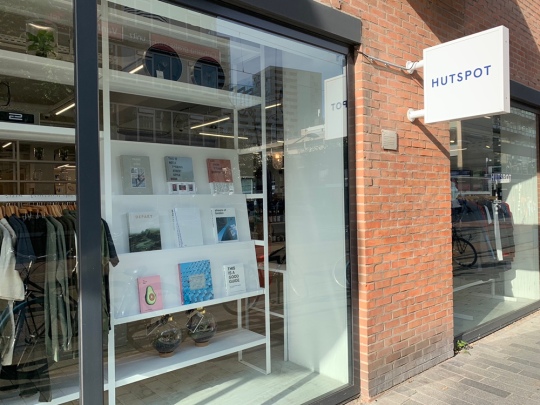 The flea market at Blaak Maarkt in the centre of Rotterdam was a complete let-down. Though I’d read online that it hosts all sorts of vendors selling food, textiles, plants and antiques, it ended up being 80% food and 20% everything else. There were only a handful of antique stands selling the sort of tat that I tend to seek out when visiting flea markets abroad and I struggled to find anything interesting on any of these stands to photograph for this blog entry, let alone to buy and take home.

Given that the majority of Rotterdam was destroyed in the 1940s, a lot of the residential architecture was the sort of interesting, debatably ugly post-war stuff that I like. I know nothing about this 1970s/1980s-looking apartment and retail complex built around a waterway but the design was interesting enough for us to stop and take notice – look at those pull-down canopies for the slanting balconies!